This is a story of two women – Omaira Qayoom and Binish Bashir, friends and business partners, from the Kashmir Valley, who have taken it upon themselves to revive their homeland’s dying handicrafts industry. It’s an inspiring tale of their will and determination. Their business enterprise, Crafts World Kashmir, which uses the traditional art of crocheting to create quirky handwoven, knitted jewellery, offers a wide range of products. They are gaining popularity, both in the valley, and thanks to their lively online presence, in other parts of the country as well. Reboot is always proud to share stories of women like these.

In the year 2010, when Kashmir was seething with unrest over the murder of
three young men framed as terrorists by five army men for the lure of cash
rewards, Omaira Qayoom met Binish Bashir. The year 2010 was one of the
bloodiest in the history of Kashmir’s unrest, with more than a hundred
lives lost yet the same year saw something small yet monumental happen. Two
young women, both 22 years of age, crossed each other’s paths. This chance
meeting was to kick start Crafts World Kashmir, an online initiative,
that’s a renaissance-in-the-making for Kashmir’s indigenous crafts industry.

Binish says she has loved craft work since her earliest days and perhaps
crocheting comes to her as naturally as her language, because she doesn’t
remember learning either. One has to look at their creations to see the
magic they can spin with two simple knitting needles. From booties, caps,
gloves, mufflers to mats and even knitted tea sets. However, the product of
theirs that has become a rage among young women in Kashmir, is marvellously
unconventional knitted jewellery. Omaira and Binish claim that theirs is
the first enterprise in the valley to offer handcrafted jewellery. Craft
World Kashmir’s knitted is heavily in vogue be it among enthusiastic
colleges goers or young brides. 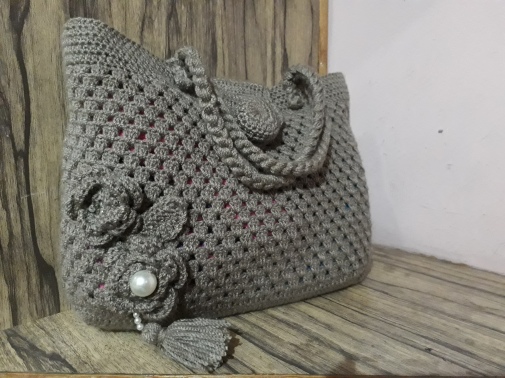 Knitting has been a dying art in Kashmir because it requires hard work and
people these days have neither the time nor the patience for that believes
Omaira. Binish had been toying with the idea of turning her craft skills
into a business for years and communicated it to Omaira two years ago.
Omaira was only too happy to join Binish in her thrilling new adventure.
Thus was born Craft World Kashmir in 2015 but that’s not how the business
got it’s name, shares Binish. The ‘crafty’ duo (pardon the pun) had started
their humble business at home with just the two of them. It was only after
they gauged the magnitude of interest and demand that their art had started
to generate that they decided it was time to reach out to a wider market.
The best way to do so was to take the business online. It was then that the
Omaira Binish venture was christened Craft World Kashmir.

Two years into their business, Omaira and Binish have four young female
employees who have been taught from scratch by the duo. Speaking of the
future, the young entrepreneurs of the beautiful valley, wish to expand
their business so as to employ more and more women, mostly the ones who
haven’t been fortunate enough to have had a proper education or the
relevant opportunities. To empower young Kashmiri women and to revive their
homeland’s dying art are their twin goals but they do gave their share of
hurdles. The frequent shutdowns and Internet bans, that have become an
unfortunate yet regular feature in Kashmir, hamper the ‘ease of doing
business’. Despite all the roadblocks, the two fiesty young women, Omaira
and Binish, who have a masters degree in Education and Sociology respectively, are determined to take their business to dizzying heights and, “Insha Allah, we shall rock in
the future”, signs off Binish.

The author likes to be known as:

“A girl has no name”