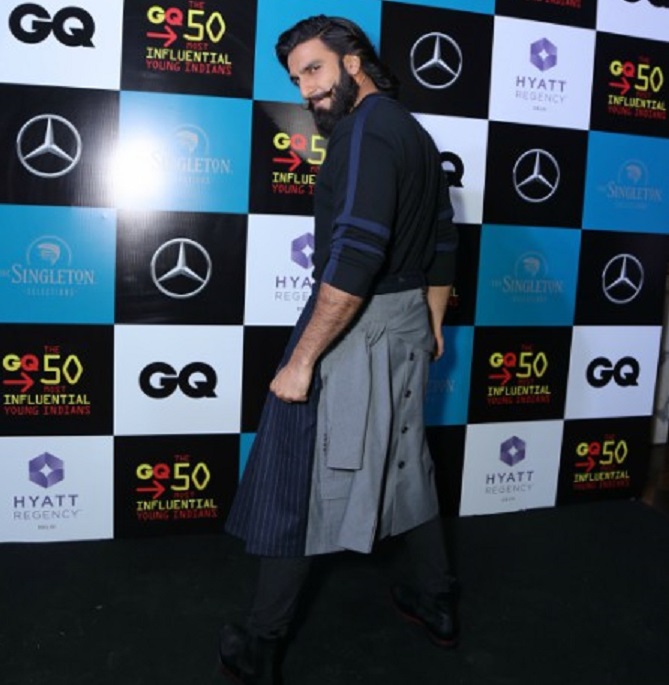 Ranveer Singh showed up to GQ Magazine’s red carpet to celebrate the 50 Most Influential Young Indians in a pin-striped black kilt with a jacketed back. His sartorial choice kicked up a storm on Twitter, eliciting thousands of comments and shares, with many people poking fun at him. A few of them captioned his picture with something along the following lines- “When your sister steals your clothes and you steal her skirt as revenge.” Most of the reactions to his choice of clothes seems to centre around the observation that this is an aberration. That women wear skirts and men wear trousers. And while women are accepted when they wear pants, which was a long and hard fight in itself, men cannot be conceived of as strutting around in skirts.

Ok, so let’s take this a little further. When I was in high-school, I realized that cross-dressing in terms of personality meant different things for each gender hierarchically. Girls with short hair, a little inferior regard for the prim, feminine norms of behaviour and a tendency to dress ‘differently’ were pronounced tom-boys, which resulted in their rise in the social order as compared to the ‘girly girls’ who were at the bottom. But boys who were slightly effeminate, or couldn’t perform as well in football or cricket, or had a voice which did not succumb to puberty underwent constant ribbing, and their status was lower than the other boys. So, while the women won the fight to wear what they wish, the masculinity of her suit acts as a prop she needs in order to be respected. Men on the other hand, are suffered to be defined by a cold, narrow, and unflinching thing like masculinity.

Imagine the everyday morning rituals of men and women, and note the difference in each. Women wake up every day to a wardrobe full of choices- skirts, gowns, dresses, sarees and many more. Not to mention the multiple kinds of men’s clothing that has been adapted for women like pantsuits, oxfords for women, bowties, trousers etc. On the other hand, men wake up to an unbroken monotony of pants, and the biggest confusion they are faced with is whether to wear a shirt or a t-shirt for that day.

Think about apparel stores we visit so often. There we see how the gendering, so to speak, of clothes has been normalised to an extent that we do not even acknowledge it. And nowhere is this more apparent than when you go to buy children’s clothes – even a simple garment like jeans is not the same for girls and boys – you guessed it – skinny for girls and loose and straight for boys. And I am not even going to get into the whole pink-blue thing!

We have been following these gender norms for too long, and that without thought. We must work towards a freer world, where such distinctions don’t divide us. And by the way, we thought he looked pretty cool (if a bit, trying-too-hard!).