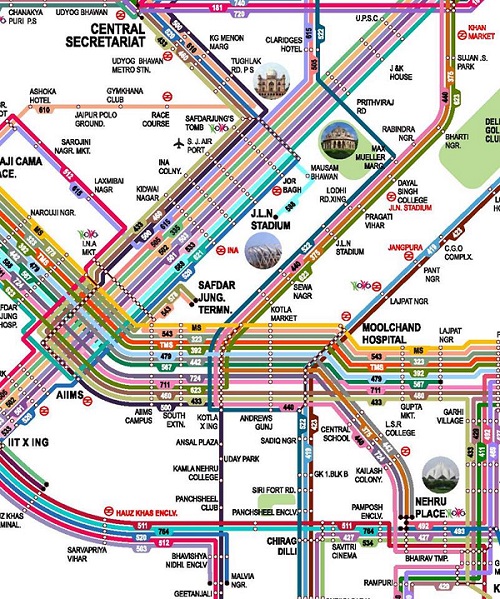 New Delhi – India’s capital and second largest city is rich with culture and chaos. However, like most of urban India, Delhi’s infrastructure is overburdened, with the city’s roads becoming almost incommutable at certain times of the day. This despite the fact that Delhi now has a widely connected Metro Railway System that links Delhi with Faridabad, Noida, Gurgaon and Ghaziabad.

The truth, however, is that not everyone uses the metro. A large part of the population still commutes by DTC buses, which have seen an overhauling in the recent years with the introduction of air conditioned, low-floor buses. But, while these changes made life much easier for commuters, there was one gaping hole that needed addressing. There were no comprehensive bus maps accessible to the public. This meant that commuters had to rely on their own judgment and experience when travelling by bus to know the routes.

That changed when brother sister duo Sudipto Ghosh and Shimonti Sinha realized that there was a real need for such a map and they set about addressing it. They created a detailed and comprehensive map of Delhi’s key 100 bus routes. It is by far the most extensive bus-route map produced for any city in the world. And, since the idea behind CityWise was to encourage the masses to use public transport more, such a map became an important first step.

Reboot Mag (RM) caught up with the pioneers for an extremely interesting session on what it took to create such a project.

Here are some excerpts from the chat:

RM: How did the idea of City Wise come about?

Shimonti Sinha : “It all started on a bored day in the office. We were making a map of Shahjahanabad as a fun exercise to entertain ourselves. While putting together all the bus stops we realized that the only way to find out where the bus shelters were and what buses came to this area was to check Google. That’s when we realized the need for a dedicated map for buses in Delhi.”

RM: Tell us about the team behind Citywise.

Shimonti Sinha: “Our team comprises of architects, cartographers and Graphic Designers. Our parent firm is a 40 plus year old Architectural Firm in Delhi called S. Ghosh and Associates.”

RM: So how does Citywise work?

Shimonti Sinha : “The CityWise Map shows you the roads of the city simplified to a 45 and 90 degrees diagrams. When one imagines roads leading from one part of the city to another, we normally imagine them as simple diagrams of straight lines. If you had to make a map for a friend on how to get to a place in the city, you would also make a simplified version, quite like maps drawn at the back of wedding invites. These are called cognitive maps since this is how we remember and imagine a certain physical space. Such maps are important because even though they are not physically accurate, they convey desired information effectively and quickly. These good old-fashioned maps are what we are trying to bring back with the City Wise Bus map.”

RM: How does Citywise work? What is the methodology and system behind Citywise?

Shimonti Sinha: “The 100 bus routes that form a part of the City Wise Bus Map, are selected on the basis of frequency. Any buses less frequent than 15 minutes were left out of the map.

The City Wise Map took almost a year to design and  to perfection.

The most interesting thing about these maps is that the routes numbering have an inherent logic. The most difficult part was to lay down the 100 routes, each with a different colour and sorting these lines of a map bringing them on top or behind other lines so that it would appear like a neat circuit of lines. It was almost like un-jumbling a bowl of spaghetti!

Each route has a unique colour code and the bus numbers are part of the line graphic. We have tried to keep similar colours away from each other.

RM: What is your business model?  How are you looking to monetize the project?

Shimonti Sinha: “ Till recently the project was purely pro bono, but now it has received support from the DTTDC, as the authorities see the benefit that our maps can bring to commuters in the city.”

RM: A bit about the future?

Shimonti Sinha: “All major cities in the world have comprehensive maps to track their public transport. In India we are increasingly dependent on Google Maps to get around. The City Wise Bus Map is a fabulous endeavor to bring the emphasis back to good old maps and help commuters get around the city better. If this is a success, City Wise could easily spread to all major metros in the city and even smaller towns.”

To learn more about City Wise visit their website at http://www.citywise.in/

Jahnavi Kohli Laungani: Lawyer by qualification, she turned to freelance
writing as a medium to voice her strong creative side and multitude of
thoughts. She writes on all things that inspire her, from politics to yoga,
womanhood, life and more.Follow her at www.jahnavilaungani.com.
She tries to balance out the challenges of motherhood while developing a
thriving career as a Work From Home Professional Freelance Content and
Creative Writer.